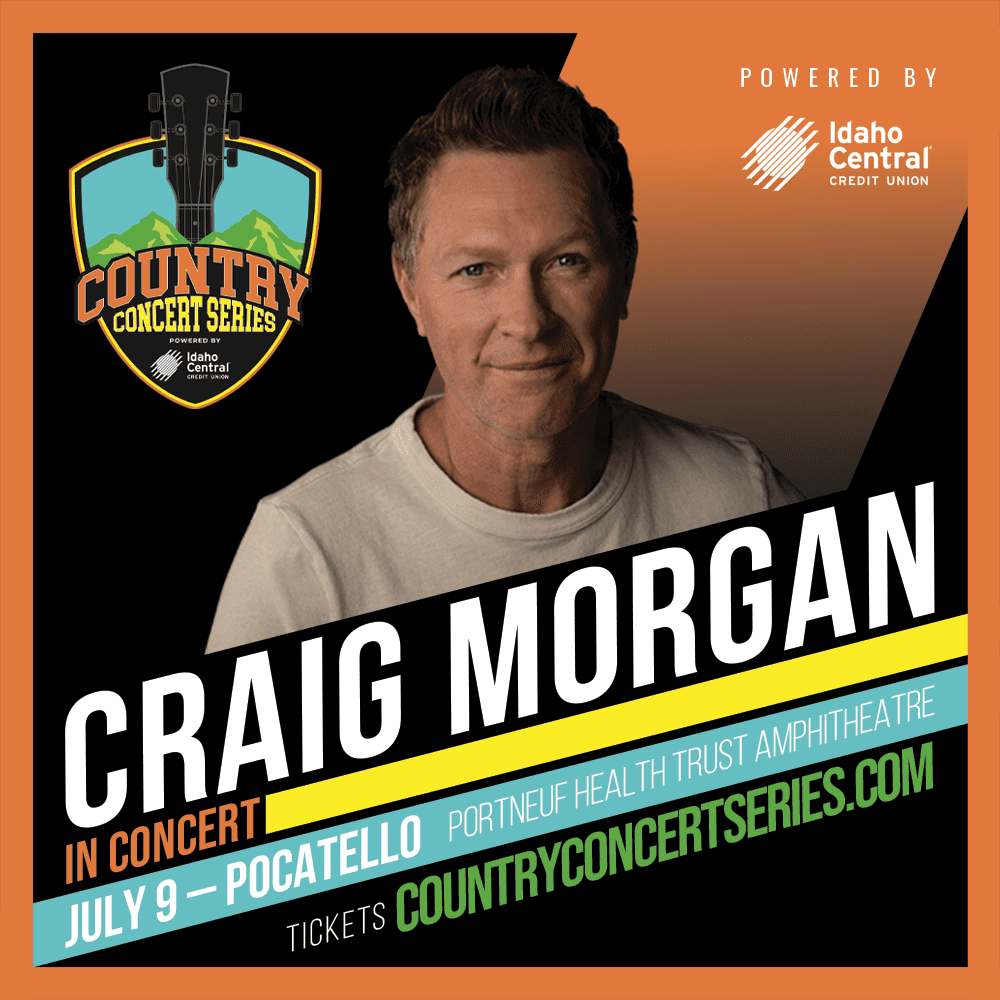 The Country Concert Series powered by Idaho Central Credit Union is proud to bring Craig Morgan to the Portneuf Health Trust Amphitheatre on July 9th!
SHOW DATE/ TIME:
July 9th
ICCU Member Doors: 5:30pm
General Admission Doors: 6:00pm
Opening act: 6:30pm
Main Act: 8:00pm
(Show start times may begin later than scheduled. We strongly suggest arriving as doors open.)
Tickets are only $25-$40 at https://countryconcertseries.com/
Lawn tickets can be purchased separately via this link> https://www.seetickets.us/event/Craig-Morgan/487099…
A multi-faceted entertainer, Craig Morgan has made a name for himself as a country music icon, TV personality, celebrated outdoorsman, and patriotic Army veteran. One of country music’s best-loved artists, Morgan has charted 25 songs on Billboard and thrills massive crowds with signature hits including “Bonfire,” “Almost Home,” “Redneck Yacht Club,” “International Harvester,” “This Ole Boy,” “Soldier,” “Wake Up Loving You,” “That’s What I Love About Sunday” and his faith-filled tribute to his son Jerry, “The Father, My Son, and The Holy Ghost.”
Craig received one of country music’s highest honors when he was inducted as a member of the Grand Ole Opry. Prior to becoming a country music star and TV sensation, Morgan spent seventeen years serving our country in the Army and Army Reserves. Morgan remains an avid supporter of America’s military personnel and has made 16 overseas trips to perform for our troops. He is a recipient of the 2006 USO Merit Award and in 2018 was awarded the Army’s
Outstanding Civilian Service Medal, one of the highest awards the Department of the Army can bestow upon a civilian, in recognition of his significant dedication to our military men and women around the world.
Watch as Craig puts his survival skills learned in the military to work in the new TV series, “Beyond The Edge” (CBS/Paramount+). Nine celebrities will live in the dangerous jungles of Panama, where they face off in epic adventures and endure the most brutal conditions, as they push themselves to go far beyond their comfort zone and raise money for their chosen charities. Craig, an Army veteran, is competing for Operation Finally Home, which provides custom-built, mortgage-free homes to wounded veterans and their families.
This fall, Craig will release his gripping new memoir — God, Family, Country — in partnership with Blackstone Publishing. He details all aspects of his inspiring life, revealing never-before-heard stories including how he worked alongside the CIA as a soldier in Panama, fought sex traffickers as an undercover agent in Thailand, forged his own path to country music stardom, and lives his life by the deepest values: God, family, country.